When I walked into the ProductHuntTO event at Pivotal Labs, the energy was calm and inviting. People were friendly, and I found myself easily striking up conversations with many people (this coming from someone who tries to be extroverted but usually just ends up in the corner eating pizza and drinking a beer, wall-flowering while I take notes).

The night started with mingling and networking — a staple at tech events — and then moved into an engaging keynote by Malgosia Green, but not before a cute welcome video from Product Hunt global founder Ryan Hoover.

ProductHuntTO was celebrating its 11th event, this time focusing on educational technology (edtech) companies. ProductHuntTO director Daryna Kulya noted that edtech is a $5 trillion global industry, but that only two percent of the industry is digitized which opens a huge opportunity for founders. She also noted that Toronto has been seeing quite the stir lately with edtech companies — as the keynote, three presenting companies, and nine other startups that “product bragged” — seemed to confirm.

Where does edtech fail?

This was the opening question posed by Malgosia Green, chief product officer at Top Hat. Green was speaking on the journey from $10 million to $100 million in revenue, a journey that Top Hat is on right now (sitting at $27 million in revenue, according to her presentation). She noted that $100M is a milestone that indicates when a company is considered big league.

The ingenious route into many universities, as discovered by founder Mike Silagadze, was to sell to professors but have students pay.

To Green, the failure of many edtech companies to reach this $100 million threshold is the bureaucratic nature of sales in education and, according to Top Hat, the over-focus on selling to school administration. There are so many players (administrators, teachers, students, and even parents), and sales can feel broken up with very extensive sales cycles. Couple this with some companies not understanding who really pays for their product, and you have a recipe for a company with a great product but no financial viability.

At Top Hat, they have figured out their sales engine, but not before almost going bankrupt in the process. While the ideal is the university/college itself paying, the ingenious route into many universities, as discovered by founder Mike Silagadze, was to sell to professors but have students pay. That way they develop advocates (professors) and make some revenue from a group already used to paying ancillary fees for classes (students), so when they approach the university and college, they are more likely to consider the product.

But just having a good sales process is not enough to reach $100 million and more. Green hinted about a few projects that Top Hat is working on which, if all goes well, might send a few textbook publishers out of business.

Interestingly enough, all three startups who demoed at Product Hunt – HiMama, Chalk.com, and Riipen – use the sell-to-administrators model and are growing nicely (though, as one of the presenters joked, not as fast as Top Hat).

HiMama allows daycare and kindergarten teachers to keep tabs on the softer side of education, leaving daily notes on what snacks kids are having, their mood, and notes on their daily development. But the part parents love the most is that teachers can send images to parents of their children playing or making a craft throughout the day.

“’Love’ is the word we hear most often from parents when they talk about engaging with HiMama,” co-founder Ron Spreeuwenberg gleefully shared as he demoed their Educator (“for teachers”) app, one of three apps: for parents, for teachers, and for administrators.

Spreeuwenberg notes that engagement from parents keeps them asking schools to use the app, but the real secret sauce for HiMama is visualization and ease of use for teachers.

“We followed classic customer development methodology,” Spreeuwenberg explained after an audience member asked how they identified which features to put into their app, “We met with about 50 daycares, in person, and spoke with directors, teachers, and parents. We asked where they struggled and what their priorities were.”

The company is growing, but for Spreeuwenberg, better engagement with early childhood education is reward enough. He was a chemical engineering graduate from the University of Waterloo with an MBA and a promising corporate career, but his passion for social entrepreneurship and his family experiences led him to found HiMama as an app where parents could truly engage on a personal level with their young child’s education.

With numbers like Chalk.com’s – working with 200,000 teachers in over 20,000 schools around the world – you would never believe that it is being accomplished by only four engineers on an overall team of only 16.

The company, whose mission is to provide personalized education to everyone, was founded by William Zhou after he went home to visit old high school teachers but instead found them toiling away with paperwork and communication errors after school hours had ended. This was apparently a rude awakening for Zhou, who had an image that teachers had it made with getting to leave school at three pm and having two-month summer vacations.

The team explained their “curriculum tool,” which is a dashboard that empowers teachers and curriculum writers to collaborate on iterative, living curriculum documents. 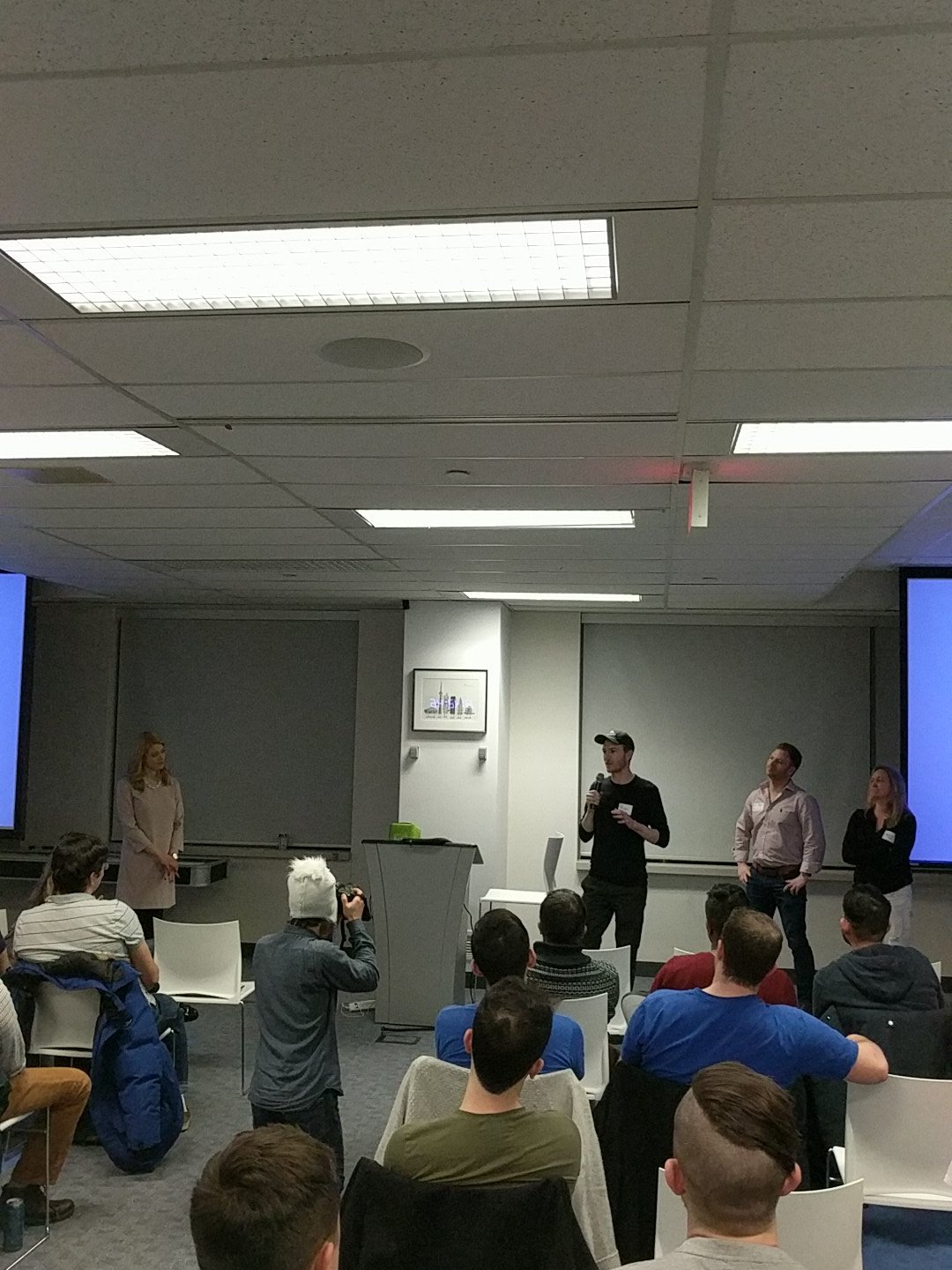 “Curriculum documents today are sometimes over 100 pages. It’s nearly impossible to edit them (through both bureaucracy and reprints), and teachers cannot leave comments or feedback to help out future teachers or students,” says Aleem Dhanji, product lead at Chalk.com.

Where their solution differs is that curriculum is broken down by unit, enables live-upload editing from curriculum writers and administrators, and teachers can leave notes that can be shared amongst themselves or with students. The net result is that the curriculum document becomes a living, breathing educational tool.

In order to develop teachers as champions in the Chalk sales process with new schools, Dhanji explained that they bring teachers, students, and even some administrators into the product development process. “We bring them into the office as much as possible to test our mockups. We’ve even begun remote-feedback sessions with teachers overseas in order to find their core problems,” Dhanji explained.

When Michael MacPherson, an app developer at Riipen, got up to demo, he joked that recruiters may as well throw all resumes in the trash because they don’t help you actually validate whether someone has the skills they say they do.

To the credit of the recruiting industry, skills-based pre-interview assessments are now very popular, particularly for tech and analysis based roles.

But Riipen wants to go a step further. MacPherson said that there are 25 million post-secondary students in North America, but only about one million find internships and co-ops that are relevant to their degree or career ambitions. Riipen, said MacPherson, is here to help the other 24 million.

The platform won’t just verify you have skills because of one test or quiz. Instead, the platform offers accredited courses (read: you still get your degree) that are sponsored by participating corporations. Once you complete the course, you are academically evaluated by your professor but professionally evaluated on a set of pre-identified skills by the sponsoring corporation.

ProductHuntTO seems to have maintained their uniqueness by having a variety of people — not just founders — demo products.

This process, MacPherson notes, helps students show demonstrable experience in specific skillsets that companies are actually looking for… all validated by the companies themselves. So if Microsoft is looking to hire marketers, they won’t just rely on campus recruiting and resumes. Instead, they’ll use a Riipen course that has key marketing competencies – in MacPherson’s example, Snapchat marketing – and see who completes the course with the highest quality work. Companies can also add their own prizes, such as a guaranteed interview or cash, to further entice top talent in the recruiting process.

The Product Brag: ten seconds at the mic

As the evening was drawing to a close (and a tad overtime, much to Kulya’s chagrin), the mic was opened to the floor for “product brag,” an opportunity for the community to brag about the cool things they are building.

A number of interesting products were bragged about, including Easiiapp.com, a global mentor network to connect students to higher-ed opportunities; BioRender, an AutoCAD/Photoshop-style app for biology teachers; and Paddle, a career learning platform that identifies your motivations and shows you content and job opportunities based on what motivates you.

When attending tech events in Toronto, it can sometimes feel like they are all meshing. The same (admittedly, lovely) people. The same (intelligent, but well-known) commentary. The same general vibe.

ProductHuntTO seems to have maintained their uniqueness by having a variety of people demo products — not just founders — and a community that is not afraid to dig into serious questions about product development and product-market fit.

#tbt to new years eve with this stage 5 stunner
Dang @shopify the lighting in your bathrooms is just A+
Me: gets up early and sits on the couch once My cat: oh look a new couch arrived
I am le tired
Two years with bae today 😍
Love when friends come to visit