“Virtual reality has allowed us to answer questions – and find new ones we never even thought to ask – about art,” proclaimed the opening presentation of the Small Wonders: The VR Experience exhibit at the Art Gallery of Ontario (AGO), the first VR art exhibit of its kind.

The AGO teamed up with the Canadian Film Centre (CFC) Media Labs and Seneca College to make this exhibit happen. The AGO is also working with the Metropolitan Museum of Art in New York, the Rijksmuseum in Amsterdam to showcase the exhibit, which is live at the AGO until Jan 22, 2017.

The art in question were ‘prayer beads,’ a pint-sized globe-shaped piece of art that, when opened up, reveals two distinct images – most often retellings of biblical stories. Several of the objects in the exhibit were donated to the AGO by the Thomson family, and are now part of a travelling exhibit, with many pieces on loan from museums and collections around the world. This includes a piece once owned by Catherine of Aragon, Henry VIII’s first wife, in the early 1500s.

The beads themselves featured intricate details and layering that the naked eye can barely discern; even expert artists with modern technology had trouble developing replicas.

The process from bead to VR experience

Conservator Lisa Ellis said that the exhibit came from numerous visitors, art critics, conservators, and curators looking at the stunning detail of the pieces and asking, “How can we see inside?”

Once the initiative was launched and CFC Media Lab was brought into the partnership, the process of bringing the original piece into a VR experience was painstaking, says interactive art director Priam Givord.

The process began with micro-CT and x-ray scans, taking images of the piece at “hundredths of a millimetre,” explained Givord. Thousands of scans are taken, composing a live 3D model within the computer software, which takes the individual scans and compiles a rough image.

This is where it gets tricky, cautions Givord. The scans come up in polygons that don’t always respect the intricate edges of the piece (think foam-covered corners on a detailed piece of furniture), so the curators had to use the VR technology to go into the art piece itself, walking around with headsets on, instructing software engineers where to remove certain pieces in order to reveal the real shape of the piece.

The culprit for why the technology is so difficult to work with at first? The materials.

“Since it is wooden, every piece is the same density and the same material – the CT scans and x-rays have trouble differentiating [intricate details],” explains Givord.

While scanning a human body, for instance, is more obvious, as different parts of the body have different densities and compositions that show up on scans, miniature wooden objects do not have such a luxury. Add in the fact that the overall piece – which can contain 10 to 15 or more fully sculpted bodies, faces, and expressions – is often no more than five centimetre long and you have a recipe for a long process; all in all, the technology took a month to fully render one prayer bead into a consumable VR experience.

The good news, though? Technology is learning. Givord explained that through human input, the technology is beginning to recognize what is a curve versus what is a wall, for instance, and the process is becoming more efficient for future pieces.

One thing that everyone involved with the process highlighted was how the VR experience did not ‘scrub’ the image, as is common in VR for gaming to make a pristine image. The VR experience at the AGO shows every nook, cranny, scratch mark, and artist indentation that appears on the original piece. This is hugely important not only for art integrity, but also for showcasing the art for visitor consumption. 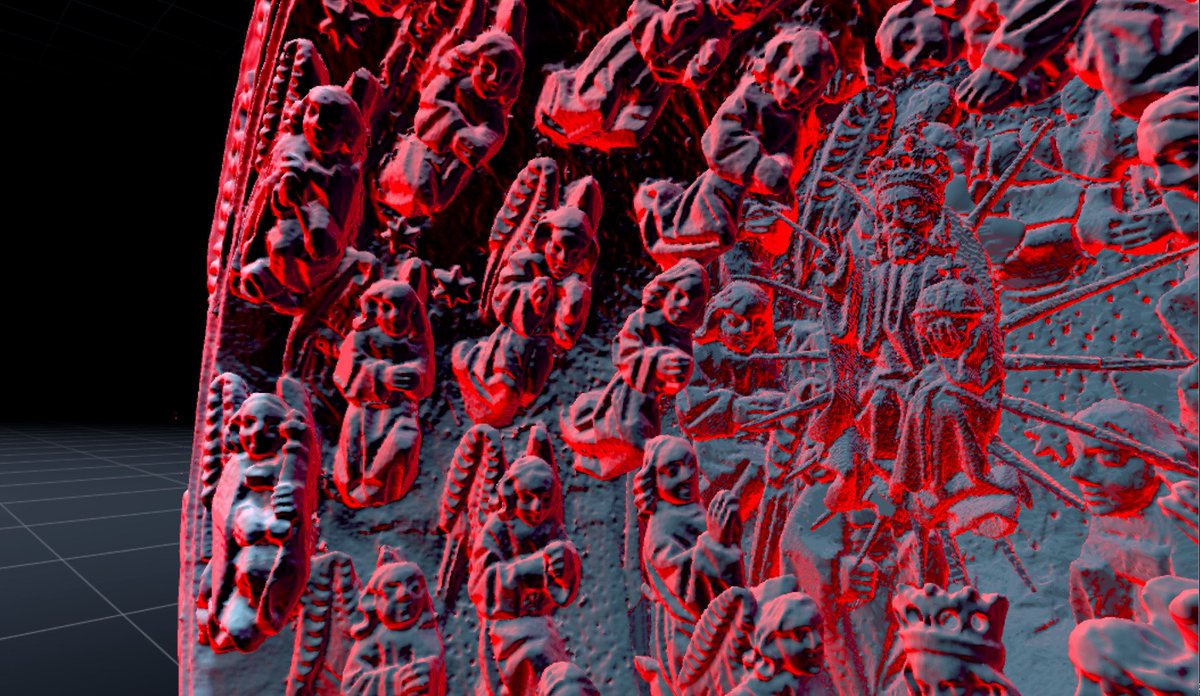 “VR is a spatial medium, so you can really play around with scale, looking deep into it or zooming out to get a high level view,” said Ana Serrano, chief digital officer of the CFC. “VR is a great medium to better understand art. In this case, you forget about the fact that you’re using technology because you’re so happy that you can see all the detail in such small pieces.”

Once I put the headset and headphones on, it truly felt like I was transported to another world. You could walk through the levels of sculpture and detail in the bead, which was a frieze of heaven on top, purgatory in the middle, and hell below it. There were easily 20 fully carved objects – humans, demons, and animals – in the five centimetre bead, with multiple layers of objects on top of one another to create a three-dimensional image. I was astounded to be able to see, as close as I wanted to get, the bead in all its detail.

While I was walking around inside the bead, completely oblivious to the outside world, what I was seeing through my VR headset was being projected onto a screen in the middle of the exhibit; not only was VR a deeply personal experience for anyone lucky enough to put a headset on, but it became a social experience for everyone else in the room to see the bead through someone else’s eyes.

It was this intersection of social experience and personal exhibit that led director of marketing and communications at the CFC, Tamara MacKeigan, to excitedly say she believes VR is the future of how we consume art.

“Experiencing this exhibit…being able to go inside one of those prayer beads and look around – actually see the intricate carvings – makes me think about being able to walk into a painting or landscape by Monet or other great artists and see a portion of the art of from the other side of the pond or canvas.”

The future of VR in the art world

In the world of ever-expanding technology, there is a tension that those in the traditional art world and those in VR will play out together over the next few years: VR as an art medium unto itself, not just a medium on which to experience art. Much like how one can paint on canvas, wood, cloth, or other materials, VR is a medium to “paint” on, a technology that Serrano notes already exists. “There is a tool called ‘tilt brush’ that works for the VR technology we have in this exhibit; you can actually ‘paint’ in this platform. It creates 3-dimensional paintings from the outset.”

When asked if VR will hinder traditional experiences of art, Margaret DeRosia, Communications Specialist for CFC, said she is not worried about VR experiences removing traditional art from our psyches and actually believes VR technology will make in-person art exploration even more prevalent. “VR does not have to work in opposition to the object itself,” she explains, “after people go through the VR experience, they look at the objects [with a new perspective].” Further, notes Serrano, the VR experience of art mainstreams virtual reality, showcasing the power of the technology to a much larger world than the traditional “techies” who might be interested in VR.

For now, the art world is buzzing with excitement of how technology can affect positive change not only to society’s engagement with art but also professionals’ understanding of the art itself.

The exhibit is touring to the Met and Rijksmuseum after it closes at the AGO, showing the world that Canada – and Canadian innovation in technology – truly can make a global impact in how we engage with our world.